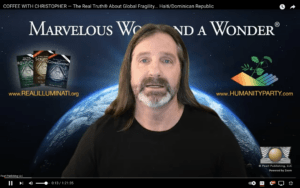 The whole effort of the Marvelous Work and a Wonder® “is to solve the problems of the world.” But, obviously, nothing is ever going to be solved “unless the world unites as one human race and begins to implement proper solutions.” Christopher chose this Coffee with Christopher to talk about what’s going on in Haiti and why. Millions of dollars are donated to Haiti each year by the United States and also the Church of Jesus Christ of Latter-day Saints yet Haiti is more impoverished than ever before. These people “don’t know what to do. How can they do the right thing to solve the problems?” Today, Christopher told the entire world how to solve the Haiti problem.

He began by sharing a news report called Haiti: Inside the capital city taken hostage by brutal gangs.  This is one of many, many news reports describing the terrible situation in Haiti. Christopher shared examples from this article that actually demonstrate “the overall problem that is happening in Haiti, that will never be solved the way that the world is trying to solve those problems.” The United Nations has a plan: A Smarter U.S. Assistance Strategy for Haiti. And here is the bill submitted to the Congress — GFA legislation. Christopher analyzed these plans and detailed the causes of the problems in Haiti, from economics to environmental disasters.

He then provided his solution: “Now, we’re going to talk about what the United States [can do], I want you guys to focus on The Humanity Party®’s plan that explains how the United States Congress can eliminate sex trafficking throughout this world in one week. There is nobody on this planet, nowhere, no PhD, no doctorate of political science, of economics or any other [degree] … that can negate and challenge the simple plan to end sexual slavery throughout this world — forced sexual slavery,” specifically, young children who are forced in sexual slavery because they have no other way to obtain the basic necessities of life for themselves and their families. The Humanity Party® has this plan. “It’s a plan that congress can implement, an incredible plan. Nobody can challenge it. Nobody can negate it.” It’s a plan that will work. Yet, how many people do we have backing this?

Christopher, using Google Earth, gave a brief history of Haiti and how it got to this condition. He described how the Real Illuminati® knew the things that were happening in the world and did all they could to try to help humanity. They based stories in their new American scripture (the Book of Mormon) on what was happening in Haiti at that time. They approached Thomas Jefferson and tried to influence him to do something to help this small country. But Jefferson “did nothing and he supported any country that wanted to go in there and do what they wanted to Haiti.” Everything that is happening in Haiti today is because of the United States of America.