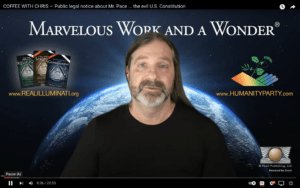 Robbie Pace was given the chance to moderate debates between Christopher and critics who want to challenge him. He took advantage of this situation by setting up a “so-called debate” to talk about irrelevant things in Christopher’s past that Christopher has already discussed. Mr. Pace is using his intelligence for malicious, evil and terrible things. Therefore, Christopher will no longer trust Mr. Pace and he has sent Mr. Pace a Cease and Desist request. This requires Mr. Pace to quit talking about Christopher, quit putting information about him out there to anyone, and he cannot discuss Christopher’s name with anyone. This is all in accordance with the court order which Mr. Pace is currently and legally responsible to obey. Any people associated with the Marvelous Work and a Wonder® are asked to contact Tony Saiki or the producers of this show if Mr. Pace ever contacts them so it can be noted and. If you possible, recording the conversation would be beneficial.

Christopher has been working on a chapter in One People, One World, One Government about the United States Constitution in which it will be proven that this constitution is one of the most evil documents ever created. This constitution gives the United States government the power to print its own money — to coin money for the rest of the world and control it — effectively supporting the United States in controlling the entire world economically. Furthermore, the original constitution was based on race, supporting slavery. It requires all to work and the majority are forced to work at jobs they don’t like. This constitution gives power to very few people who, enriched by pharmaceuticals and medical supply companies by donations, prevent adopting a universal healthcare system. It gives 110 people control over the rest of human society. Every terrible thing that is happening in this world can be traced back to the United States of America, including being responsible for every single human being that’s died over in Ukraine, which America could have stopped many times.

This can all be changed, but not through violence and protests. “Violence has no place anywhere. Protests have no place anywhere in the human condition at all. They’re wrong.” We should not threaten people or upset the peace of a person or force our opinions down anybody’s throat by putting a placard up or stopping a freeway. It can all be changed “according to the law, without protests, without a single shot being fired, without revolution.” The United States Constitution, in all of its evilness, does have a good provision that allows for a majority of congress to amend or completely rewrite its constitution. This is how we can make changes peacefully.

The Real Illuminati® tried to teach us what our government should be based on in their new American scripture, the Book of Mormon. They tried to influence the Christian people to the base the foundation of the United States of America “on the rock of Christianity — pure Christianity, unembarrassed, unadulterated by the churches and leaders of the Christian churches — the simple [teaching] of Jesus which is do unto others as you’d have them do unto you.”

The Real Truth®, explained by a True Messenger, must be available so that nobody who lives on this planet and who dies can say that they didn’t have a chance to know the Real Truth®, that it wasn’t there. They need to see for themselves if the Real Truth® was actually available on this earth would they have accepted it? This will take away all excuses. In describing his responsibilities, Christopher quoted from his website: “I am a messenger – not a guru, prophet, seer, revelator, or leader of any kind. I have a message for this world. That’s it — nothing more and nothing less! I am going to tell this world how to save itself, and give each person living here the opportunity to get involved, or not.” The Zeitgeist shows are all about presenting us with the Real Truth®. Christopher will “teach [us] the Real Truth® about why this world exists.”