COFFEE WITH CHRISTOPHER — If you want to know just how ignorant you really are … TUNE IN! 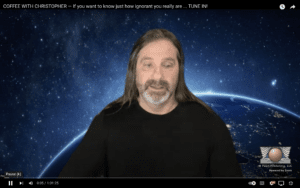 Christopher has changed his story many times according to his audience and what people are willing to accept. He now states that there is no Real Illuminati® — that everything that has been produced as a part of the MWAW has come directly from his own head. With this latest claim, everyone is challenged to investigate that which he has produced and consider the power that it has and what Christopher’s motive might be for sharing the information that he does — completely free of charge and not expecting anything in return. Journalists are encouraged to interview those who have been affected by Christopher’s teachings, to find out how their lives have changed and why they continue to follow Christopher and what he teaches.

The information that Christopher has provided has caused hundreds of people who were once very staunch Mormons – members of the LDS Church — to leave the Church. Many would be willing to testify in a court of law that nothing could have taken away their testimonies of that church except for The Sealed Portion and other information that Christopher has produced. This demonstrates the power and intelligence that Christopher has. He has opened the minds and hearts of many who have been deceived. They have become better, wiser, freer, and happier people, more concerned about the problems in this world and solving poverty. This is a motivation for Christopher to do what he does.

Christopher does all he can to free people of the bondage of religion. Removing the restrictions put on people by church, “God,” and “the devil” makes people responsible for their own lives and choices. Taking away the control that these beliefs have over people gives them the opportunity to learn who they really are.  Whereas religious leaders discourage questioning, even telling people to “doubt your doubts,” Christopher encourages all people to question and challenge everything, even all of the information he, himself, has provided.