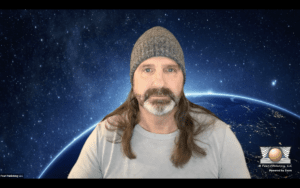 Christopher explained some of the problems going on in Yemen and in other areas of the world, detailing these situations using Google Earth. He shared the following news articles and described how each story demonstrates problems we are facing in the United States and in this world. He also gave clear explanations of how we could solve each problem.

Warnings and clues were given by the Real Illuminati® in their new American scripture, the Book of Mormon, Ether 2:7–12, which Christopher read. It described how the area of the United States was set aside as a blessed land IF the people would follow the teachings of Jesus Christ. We are, instead, “ripening in iniquity until [we’ll] be swept off.” Christopher explained that “the wrath of God is simply the non-intervention of highly advanced human beings who choose not to intervene any longer in the affairs of mortal people living upon this earth.” Christopher shared D&C 1:35 and explained about “the devil [people’s egos] having power over his own dominion.” Clues were also given in the Book of Mormon, as the Real Illuminati® described a great, white Jaredite nation, established in the area of the United States at the time the languages were confounded at the Tower of Babel. “Within that narrative, they incorporated some incredible clues.”

Christopher plans to demonstrate how the Book of Mormon, “without any doubt, explains that Jesus Christ is both the Father and the Son, that there is no Holy Trinity, that Jesus Christ is the Father, the creator of both Heaven and Earth.” He will also prove that the Book of Mormon states that God cursed the skin color of the Native American people and of people of color. He asks the Church of Jesus Christ of Latter-day Saints to get rid of the Book of Mormon and the temple endowment. He further warns: “Someday, in the future, a massive earthquake beyond anything that’s hit this world is going to completely destroy the headquarters of the Church of Jesus Christ of Latter-day Saints in Salt Lake City, Utah.”

The message of John the Baptist, the Book of Mormon, Isaiah, every True Messenger, and Jesus Christ, himself was: solve poverty. “There’s only one way this earth is going to be saved. POVERTY MUST BE CONFRONTED AND ERADICATED!” Until we eradicate poverty, “this world will never get better and it will continually get worse. The things that are coming through peoples’ minds, all this technology, will continue to do what it’s doing, creating $700 million bombers, creating other weapons” to destroy each other. Instead, “we could get together and [Christopher] could lead this world into eradicating poverty first. And then we [could] deal with the rest of our problems.”