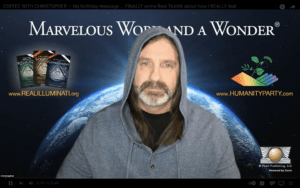 Today is Christopher’s birthday. He took this time to explain that he’s been trying to alienate himself from his followers, so-called followers, friends, and supporters. He’s “done a lot to offend a lot of people.” He has basically withdrawn himself from all worldly and intimate relationships. He’s “not going to have any relationships in the future. [He] can’t … they’re not appropriate for [him].” He’s tried to help people understand that they shouldn’t put him on a pedestal as the world’s only True Messenger. He’s been trying to offend all of us so we will stay away from him personally. He doesn’t want any type of MWAW group “because that’s where the problems start.” He adds, “I’ve never known a person who’s been hurt and offended by me who hasn’t lied about me in some way. … I cannot trust anybody anymore. I cannot trust any of you.”

If Christopher wanted to give himself any kind of a birthday gift it would be to stop manipulating and offending people and to do his best not to allow critics and enemies to get irritate him. He states, “Here’s my birthday present to all of you. I’m not going to continue to swear at you and yell at you and offend you. I’m not going to point out all these stupid things that you’ve done. … I’m done being mean to you folks because I no longer have to worry about having a group.”

If we want to give him a present, this is all he asks of us: “Shut up and don’t talk to other people about this work. Let people find it on their own, if it so be that they should find it.” If it’s supposed to be part of their experience, they’ll find it in their own way. We have no right to give our opinions because we don’t understand why people are even existing on this planet. He doesn’t want followers, supporters, or friends. He wants us to just live our lives “those simple lessons that are given in the Book of Mormon and the Bible that were related to and attributed to Jesus.”  He doesn’t want us to give our opinion to anyone and not lust after people if we’re involved in a relationship. “Leave that relationship before you start lusting after another person so you don’t hurt them. Quit being mean.” This all culminates in one thing: “love your enemies, do good to those who hate you and persecute you and despitefully use you.”

Tomorrow, during the Zeitgeist show, Christopher will explain and prove to us how extremely important this Marvelous Work and a Wonder® is to this world. “It’s important when you understand the reality of why humans exist on this planet in the first place.” The message he has to give is the “Real Truth®. It will either save or condemn this world.” Christopher will teach us “the Real Truth® about why a person exists in this world. What does existence mean? It even comes so far as to talk about that. What does human existence actually mean? What is human consciousness?” Christopher’s job is make the Real Truth® available so that when a person comes to this earth, they know it is here. If the Real Truth® is not here and nobody can explain what it is, they have an excuse. They have an excuse for being bad.