COFFEE WITH CHRISTOPHER — “The fault, dear Brutus, is not in our stars, But in ourselves.” 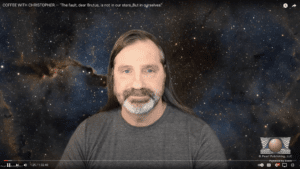 For many years, Christopher was receiving direction and counsel from a group of people called the Real Illuminati®. They introduced themselves in their new American scripture, the Book of Mormon, as the characters called the three Nephites and John, the Beloved. They used these characters in their story to introduce the concept that there exist highly intelligent people who work behind the scenes of humanity to help humanity. They described the work that they had to do as a Marvelous Work and a Wonder®. This group was responsible for recruiting Christopher and Joseph Smith (after their brain transfigurations, described in BOM, 3 Nephi 28) to help them with their work. Though they are described in the Book of Mormon, which the Church of Jesus Christ of Latter-day Saints claims to be the word of God and the basis for their church, leaders of that church not only don’t speak of them but also refused to meet with them, when given the opportunity. After this refusal and having fulfilled all that they had set out to do, realizing that there is no longer any hope for this world, the Real Illuminati® (the three Nephites and John, the Beloved) are now gone. They have finished their work and have left Christopher here alone to finish his.

Christopher described why there is no hope for this world by reading from the Book of Mormon, 3 Nephi chapter 28 and 2 Nephi chapters 27–31, which describe the wickedness of this world perfectly. He demonstrated how the Church of Jesus Christ of Latter-day Saints fulfills all the negative prophecies in the Book of Mormon perfectly. He further used the LDS temple endowment (as originally written) to teach us about the symbolic meaning of “cherubim and a flaming sword.” He demonstrated how this important work is treated as a “think of naught” by this world, specifically by the Church and also Congress as they have ignored specific solutions provided by the Real Illuminati®. Two examples that he pointed out are the plan to end forced sex slavery in one week, presented by The Humanity Party®, which Congress could easily do, and the LDS Church, instead of building more temples and church buildings, should be constructing homeless shelters and welcoming centers to help immigrants transition to better lives.

Christopher’s job now is to provide us with the Real Truth®, which he will do in his Zeitgeist shows. This is the most important thing that could ever be done on this planet. Having the Real Truth® available to us while living on this earth will allow our Advanced Selves to see what we will choose with our free will. We cannot lie about this earth experience. We will judge ourselves by how well we get along with other people. All the achievements that we accomplish and praise and glory we experience in this life experience will mean nothing when we die. We will only care about how we treated others. The only way this world can be saved is if the people of this world become one heart and one mind and eliminate poverty. Whether we support that or not will become evident to us as we learn more of the Real Truth®. Christopher warns us that if we don’t listen to this message, which all leads to the words of Jesus, it will be better that we had not been born.