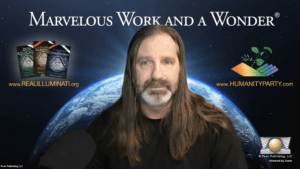 Everyone in this world has been conned by religion, science, and/or philosophy. The Real Illuminati® (also known as the three Nephites and John, the Beloved) understood these cons and did their best to try to expose them. Their website contains a plethora of information, including books, all free to download. Additionally, The Humanity Party®, a legally registered political party in the United States, has a website containing the proper blueprint of how to set up the best world government possible. The Real Illuminati® called their work a Marvelous Work and a Wonder®.

Joseph Smith and Christopher each play/played a key role in the development of the Marvelous Work and a Wonder®. Three major events happened in the life of each of them:

Historically, each person (Socrates and Inpendius, for example) who tried to expose the cons of the religious and government officials was killed. Therefore, the Real Illuminati® instructed Joseph and Christopher to con people in an attempt to open their minds so they could get people to think. A good demonstration of Joseph’s efforts is found in Doctrine and Covenants section 93, which Christopher explained.

Christopher’s job now is to teach us the Real Truth®, taking away any excuses that this world was unfair. Christopher talked about the Russian/Ukraine war and UFOs but he also exposed the enormous con of the United States Constitution. Four cons built into it, described by  Christopher, presented counting down are:

The majority of this world does not want to know the Real Truth®. People are comfortable in the cons they’ve come to believe in because of the value they find therein. This will lead to the inevitable destruction of this earth and solar system. Those who really want to know, who follow this work, can no longer be conned. The Real Truth®, an allegoric “armor of God,” protect those who learn it from ever being conned again.