CWC— I’m a monster who deserves the Nobel Peace Prize in physics, physiology, and peace. 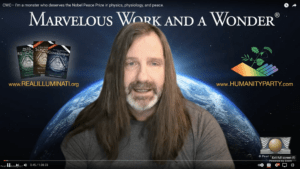 While many would describe Christopher as a monster — a con artist, charlatan, pedophile, sex trafficker, rapist, terrorist, deceiver, and manipulator — there is no scientist, professor, religious leader, or any other learned person who could stand against him in a debate and keep any degree of credibility. Though there are many who claim to have great knowledge and understanding, Christopher can confound them by asking them simple questions, for which they have no answer. Christopher’s knowledge of Real Truth® doesn’t come from studying textbooks or receiving a degree. He learned it from people who actually understand the universe perfectly. He has access to documentation to which nobody else has access. Christopher deserves the Nobel Peace Prize.

Science has made many advancements and will make many more that could be very beneficial to society. They could, for example, provide free utilities for all humans on this planet, as they learn more about fusion. However, everything they do comes with a price and is only accessible to those who can afford it. If scientists would use their discoveries to benefit all of humanity, Christopher could teach them many things but their pride stands in the way, keeping them from listening to him.

There is no hope for this world and solar system. It will all be destroyed in 120+ years. Meanwhile, advanced humans will continue to come to this earth in an effort to prove to themselves what type of person they really are and if they should continue to exist in pursuit of happiness. They know that the Real Truth® is now here and available. Providing the Real Truth® is the purpose of the Marvelous Work and a Wonder®.