CWC —Lost all hope. I would destroy the solar system if I could. Well … maybe a glimmer of hope. 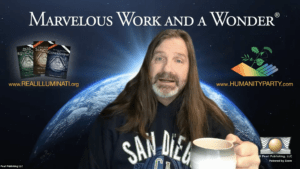 Christopher’s only reason for living is to explain the Real Truth®. He has access to a plethora of information, including ancient documents, some as old as a billion years old, yet only a small number of people are interested. Even if he brought some of this physical evidence forward, his critics and enemies would discredit him and try to prove that he is smart enough to invent all of this to deceive others. The Real Truth® completely discredits everything believed by the scientific and religious communities but it can solve any mystery that the human mind has ever had and make it make sense.

Of all the videos that have been produced by the Marvelous Work and a Wonder®, most have only a couple of hundred views. Recently, the producers of his show put out a small, one-minute clip. In two days, it got over 1,500 views. Popular social media (TikTok, Facebook, Twitter, etc.) influencers can present the weirdest, most vacuous, and stupid things and get millions and millions of views. They find a gimmick, a way to present themselves that keeps people entertained. Christopher challenged his producers to come up with a way that they could present his information using a different character and presenting questions, according to the Socratic method of teaching. He gave several examples and ideas and brainstormed about this with those watching his show.

Although Christopher is suffering from extreme depression and a loss of hope for this world, he now has a better understanding of why the Real Illuminati®, a group of incredibly intelligent people who have been mentoring him, left him to himself. This is so he can no longer depend on them to counsel him on how to present the information. He now has to depend on us. We need to help him understand how to present this information in a way that will take away the excuse of anyone not understanding it. He is the last True Messenger and he needs to explain the Real Truth® clearly so that anyone can understand it, before this solar system is completely destroyed.