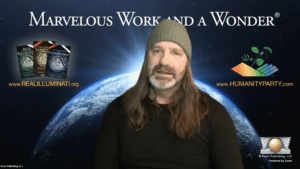 Christopher has no hope. People who have known Christopher on an intimate level, who know he’s not a bad person and that he would do anything to help and serve other people, no longer support him or this work. They know the power of The Sealed Portion and the other books of this work and used them to change their own lives. They know that the plan to end poverty as originally presented in this video and then presented here is unchallengeable, yet they no longer support it and their children mock it and Christopher as well.  If these people can’t get it and support the work as needed, what hope can Christopher have? Furthermore, the Real Illuminati® chose to end their existence upon this planet because there is no hope for the human race, leaving him to do this work alone.

Christopher demonstrated his understanding of science, despite his formal education and degree, confounding it with just one simple yes or no question. To do this, he presented an argument. A person could argue that the human race has existed and developed five previous time during the history of the earth, each time gaining enough technology to destroy themselves through nuclear war. Scientists would instead argue that a great asteroid or comet hit the earth, completely destroying most life on this planet, including the dinosaurs. Science could provide a plethora of evidence to support their claims by describing the results of this theory. Christopher’s one question that could completely confound them is this: “Couldn’t an incredibly powerful nuclear explosion have done the same thing? That’s a yes or no question.” He further provided evidence that Socrates talked once of an ancient city of Atlantis, written about by Plato, again proving that he is the world’s only True Messenger who knows the Real Truth®.