The Real Truth® about GRAVITY, MAGNETISM, and the CREATION OF EARTH 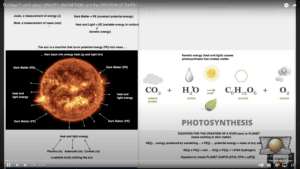 The sun, the earth and planets were all created by Advanced Humans. The sun is a machine that sucks in dark matter and converts it to mass (hydrogen, helium, whatever), which it then converts through fusion into light and heat energy. The process of sucking in dark matter creates a vacuum suction that pulls the planets towards the sun, keeping them in the sun’s orbit. The light and heat energy that the sun emits keeps the planets from being sucked into the sun. Plants are machines that use the light of the energy from the sun to grow and produce oxygen.

Just as Advanced Humans created the sun, scientists could create another planet. To do this, they would need to create the proper machine that produced kinetic energy that would react with dark matter.