Thirteen years ago today: November 5, 2009 — The day my nephew Aaron T. Nemelka was killed during the Fort Hood massacre … Why most Nemelkas hate me. 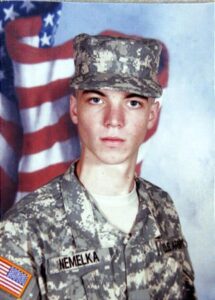 On November 5, 2009, Christopher’s nephew Aaron T. Nemelka was killed during the Fort Hood Massacre.  To the great chagrin of his family, Christopher presented a video containing the Real Truth® of this terrible event. This video will be his legacy.

The video presents an uncanny comparison between the lives and beliefs of Christopher’s nephew and the man who shot him. Both were taught to regard the other as a terrorist.  Neither is a terrorist. “The real terrorists are the institutions that create prejudice, hate, bigotry, and which have been the cause of all major wars throughout the history of humankind. The real terrorists of this world are the religions and governments of humankind.”

The only hope we have is in the youth, who “must stand up and take charge of the future.” To make changes, they must open their minds and question authority — that of the government and of religion, as well as those standards set by their parents. The book Human Reality — Who We Are and Why We Exist can “help the youth of this world to know what to do and to give them the knowledge to make the necessary changes . …” This book “transcends the opinions, views and speculations of government, religion, and science, and every other human-made institution that has done no good in our world.”

Thirteen years ago today, the worst tragedy the Nemelka family ever experienced happened.

If you desire, you can research and find out all that has been reported and published about the U.S. Army Fort Hood massacre that took place on November 5, 2009.

Aaron Thomas Nemelka was the youngest son of my eldest brother, Michael J. Nemelka II (from his first wife, Teena Blades Nemelka). My brother is a staunch LDS/Mormon, and couldn’t be more opposed to the work that I do.

What the world does not know, and what my family wishes I would have never revealed, is that Aaron was given a choice by my brother to either go on an LDS Mission or join the military.

Like most of my brother’s children, Aaron wasn’t too keen on the LDS/Mormon Church.

My nephew’s death gained worldwide attention, especially locally among the LDS/Mormons of Utah, where my brother lived. Although there are hundreds of local people who die unnoticed and unrecognized by the LDS Church, the Church wanted to show forth its love and compassion for such a devastating event, ONLY BECAUSE OF THE PRESS IT WOULD RECEIVE.

While planning Aaron’s funeral, Thomas S. Monson (who was the president of the LDS Church at that time) had his people contact my brother’s family and ask if Monson could represent the Church and speak at Aaron’s funeral. Unfortunately for my family, the local paper announced that Monson would be speaking at my nephew’s funeral. This was stopped immediately when I personally wrote a letter to the LDS Church warning that, if Monson or any other major leader of that church spoke, I would do everything in my power to tell the Real Truth® about Aaron’s lack of devotion to the Church.

Because of my letter, the Church canceled any interest in sending a high-ranking officer in this church to speak at Aaron’s funeral.

I told the Real Truth® about my nephew and his murderer Hassan Nidal. I presented both sides of the story in a video.

My mother, Diane Heath, called me an asshole when I published the video. (Mom probably still calls me an asshole sometimes behind my back.)

Most of my family wouldn’t watch the video and, of those who did, NONE was appreciative of my bravado.

I was the ONLY ONE telling the Real Truth® about why Aaron joined the military. In fact, I was partially responsible for Aaron joining.

I forced my son, Joshua Ladenburg* to join the military to help him stabilize his life. After finding some good success in the military, Joshua then told his cousin Aaron that it was good for him (Joshua), and that Aaron should really think hard about joining.

*(Yeah … long story very short … Joshua was adopted away from me and legally given another man’s name. That man (Ladenburg) abandoned him when he and Joshua’s mother divorced … and … Yeah, his mother contacted me to help Joshua, who was floundering aimlessly as a teenager … I know, right?! They took Joshua away from me, but when he had major problems that they couldn’t handle, they called on me to relieve them of the problem and help Joshua … Yeah … REALLY!)

The following video will be part of my legacy, of which I am very comfortable proclaiming, I did EVERYTHING in my power to tell the Real Truth®.